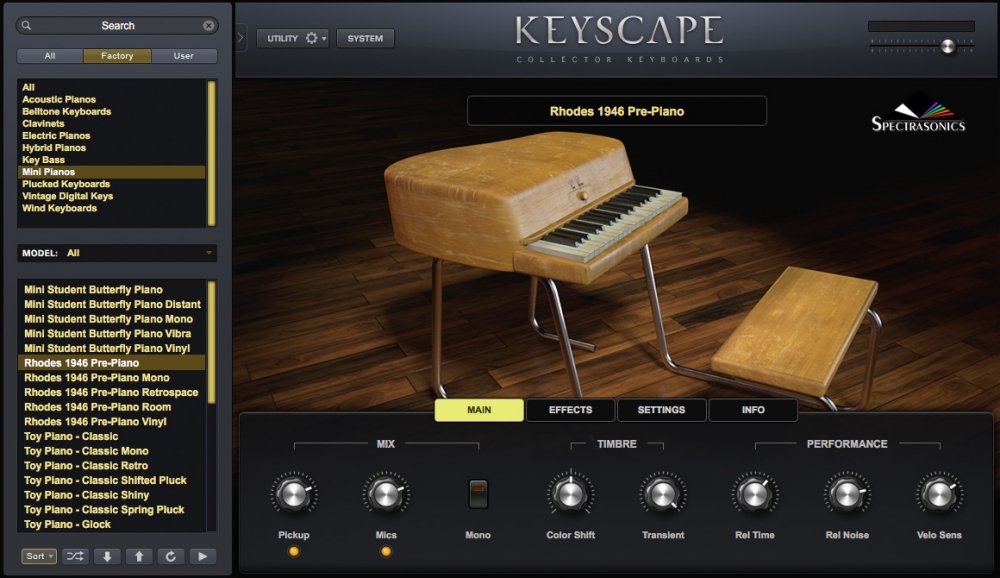 It’s a great privilege for us to present a truly historic instrument for the first time in software form – the world’s very first Electric Piano! It took many years and multiple attempts to track down this incredibly rare instrument. It was handmade by the inventor himself and set the remarkable legacy of the Rhodes® Electric Piano in motion.

During World War II, Harold Rhodes was deeply moved by the suffering of wounded soldiers and wanted to design a compact musical instrument to aid in their rehabilitation. The first prototype instrument he developed was an acoustic, 2 1/2 octave keyboard he called the “Xylette.” Small enough to fit on a hospital bed, the instrument was cleverly made with tines crafted from small aluminum tubes which Harold scavenged from the wings of a wrecked B-17 bomber. He instituted an accompanying music therapy program for which he was later awarded the Medal of Honor. The Xylette was used in Air Force hospitals by over 150,000 soldiers. After the war, Rhodes continued to ruminate on his idea and came up with the idea of a self-amplified version for students.

In 1946, the hand-built electric ”Pre-Piano” was an instant success and his new Rhodes Piano Co. sold a batch to the Los Angeles School District’s music program. The Pre-Piano even came with an attached seat, like a student desk. Of course the original Pre-Piano sounds quite different than the iconic Rhodes® sound of the ‘70s that we’ve come to love. The grandfather clock-like tines were amplified with a piezo pickup routed to a small tube amp and speaker – the only Rhodes® instrument ever equipped with self-amplification.

After a few years, Harold grew frustrated with manufacturing problems. He shut down the company and, in a drastic career change, took up farming! Fortunately for us, Harold couldn’t stay away from music and arrived back on the scene over a decade later with the Rhodes® Piano Bass and soon after, the full-sized Rhodes® Electric Piano. Only a small number of Pre-Pianos were ever produced, and far fewer survive, today. We’ve meticulously restored and preserved this rare slice of musical instrument history in Keyscape so you can make your own history!