FM stands for Frequency Modulation. FM has been a feature on synthesizers since the 1960s, but it became mainstream in the 1980s with Yamaha’s DX/TX series of digital synthesizers. It was well-known for producing glassy, metallic, and other harmonically complex sounds.

FM can take simple waveforms, like sine waves, and make them sound quite complex. In Omnisphere, any Soundsource or DSP wavetable can be modulated with FM.

Each Layer in Omnisphere has a dedicated FM Oscillator, which acts as the modulator. This dedicated oscillator can utilize different waveforms and its Frequency, Depth, Shape, Symmetry, and FM Sync can be modulated.

Turns the FM modulating oscillator ON or OFF. 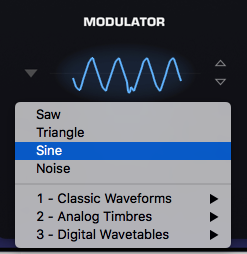 While many FM synthesizers use only sine waves as modulators, Omnisphere can use any of its more than 500 wavetables. You can select them from the menu by clicking on the waveform display or by using the stepper arrows to the right of the image.

The small music-keyboard switch enables or disables Keyboard Tracking. The TRACKING button determines if the modulator oscillator tracks the keyboard.

Controls the frequency of the modulator oscillator. Because the modulator is unheard, it does not change the pitch of the original Oscillator, but instead alters the timbral characteristics of the Oscillator’s waveform.

When this horizontal slider is set to just above the minimum, it can produce LFO-type pitch effects. Moving the slider towards the maximum increases the frequency and begins to oscillate fast enough that it will introduce timbre changes.

The notches along the FREQUENCY slider are markers for the frequency ratios that will produce the most musically-useful results.

These values at the notches are decimal versions of the following ratios:

Controls the modulator’s depth. The higher the DEPTH slider is set, the more the dedicated modulator is affecting the timbre of the Oscillator.

When the NORMAL tab is selected, the DEPTH range is narrow but with more resolution, and is useful for adding a subtle FM-color to sounds. When BOOST is selected, the range is much higher, allowing you to produce more dramatic FM sounds.

Moving this slider sweeps through the wavetable selected as the Modulator, and depending on the wavetable, can create subtle or dramatic changes. The waveform display will dynamically change the waveshape as the FM SHAPE slider is moved.

FM SYMMETRY varies the span of the wavetable selected as the Modulator and is most commonly used for Pulse-Width Modulation (PWM). This is especially useful when FM SYMMETRY is used as a modulation destination, as it adds shifting tone color and movement to the sound. The waveform display will dynamically change the waveshape as the FM SYMMETRY slider is moved.

Hard Sync was a feature on some analog synthesizers which gave the timbre a “throaty” diphthong type of sonic characteristic when swept. Hard Sync was popularized on synthesizers like the Prophet 5 and the early Oberheim synthesizers for a more metallic and aggressive timbre, and is especially useful for lead sounds.
In the past, an oscillator would need to be sacrificed to get the hard-sync effect, but Omnisphere has a hidden, dedicated oscillator just for FM Hard Sync. The FM Hard Sync Oscillator becomes the slave and the FM Oscillator is the master. The slave is forced to restart its waveform when hard-synced with the master oscillator and the master controls the pitch. Any changes to the slave oscillator’s pitch will not change the pitch of the master—but change the overtones and harmonic structure instead. The waveform display will change dynamically as the FM SYNC slider is moved.

NOTE: All the sliders on this page are modulatable.