Clicking the Zoom icon next to the different Velocity Curve presets opens the VELOCITY CURVE ZOOM. This page provides detailed controls to modify the velocity curve of a Patch. The Velocity curve settings are global to the Part—meaning they will be applied to all layers, but the amount applied to each layer can be controlled independently by the VELO Depth knobs on the left of the overview section.

You can save, copy, and load preset Velocity curves from the drop-down menu next to the VELOCITY CURVE ZOOM header.

Omnisphere includes a variety of velocity curves specifically optimized specifically for the most popular keyboards and controllers. Select the curve that matches your keyboard from the VELOCITY CURVE ZOOM pull-down menu. Here is the list of presets. 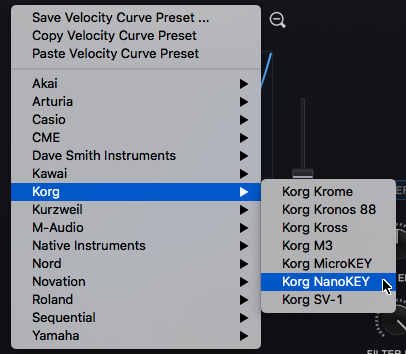 *You can save your own custom velocity curves as presets from this menu. 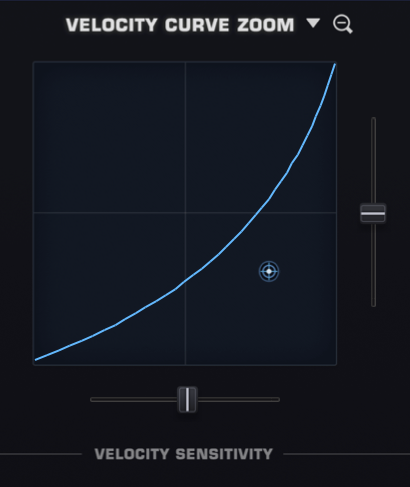 Based on a simple X-Y pattern, the Velocity Curve converts the incoming MIDI velocities into the MIDI velocities sent to the plug-in, effectively changing X to Y in a manner you can scale and control.

The horizontal axis and represents the MIDI velocity that Omnisphere receives from your controller. Moving the horizontal slider (SLOPE) to the right will scale lower incoming velocities and convert them to higher velocities as if you were playing harder.

The vertical axis represents the MIDI velocity value used to trigger Omnisphere. Moving the vertical slider (OFFSET) will control the offset and range of the converted velocity.

The CONTROL POINT allows you to modify the shape of the velocity curve from linear to convex or concave for even greater sensitivity. It can be dragged anywhere in the grid and sets the curve’s exponential value. In other words, you can set how quickly and at what point in the velocity range there is an increase or decrease in intensity.