The Orb’s movements, whether manual or INERTIA-based, can be captured with the Orb’s built-in recorder. These movements can be saved as part of the Patch. This simple feature adds a dynamic quality to a sound that is unique and quite difficult to achieve with conventional controllers.

By using the RECORD button and the menus below it, the built-in recorder can be programmed to capture a general idea of the movements (MOTION) or to record precise movements over 1, 2 or 4 bars, relative to your sequence. The recordings can be set to play back synced to LEGATO or SONG POSITION.

In all cases, the Orb creates a looping cycle by smoothly connecting the trajectory of the end with the beginning of the move, no matter how complex.

Whenever the the Orb’s built-in recorder is in use (either when recording or playing back recorded movements), the Orb cursor will turn red. 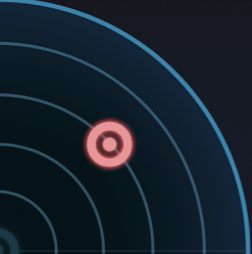 If you’re not satisfied with the movement that was recorded, press the CLEAR button to start over.