Step Modifiers are powerful, flexible tools that add specific behaviors to any Step, allowing you to create complex and creative Patterns.

Click on the square pane above each Step to reveal the Step Modifier menu, then make a selection from the 5 fly-out menus.

“None” is the default state and no Step Modifiers are applied. If a Step Modifier is selected, you can select “None” to clear it.

You can select the Transpose value by choosing the number of half steps the played note will be transposed up or down.
Range: +/- 24 half steps

When a Transpose Modifier is selected, the transposition value will be displayed in blue.

You can select the Slide value by choosing the number of half steps the played note will bend up or down in a step, allowing you to create TB-303-style pitch slides as part of the arpeggiation. The speed at which the Slides occur is set by moving the Rate Slider above the Slide value—all the way left is the fastest and all the way right is the slowest. Slide is the only Step Modifier that can be used multiple times over the length of a multi-step note, allowing for legato Slides.
Range: +/- 24 half steps

NOTE: Slides are always relative to the played note.

When a Chord Modifier is applied to a Step, that Step will play a chord (some or all of the notes held in the Pattern, depending on the selected Modifier).

There are 9 Chord Modifier Types:

NOTE: Step dividers can be applied to tied notes. For example, if four 16th-note steps are tied and a Step Divider 3 is used, it’s possible to add irregular rhythms to the pattern.

The Strum Modifiers in Omnisphere’s Arpeggiator are a fun collection of creative tools that let you simulate the strumming patterns of a guitar with a variety of Strum Patterns.

Guitar strumming is made up of downstrokes and upstrokes. Downstrokes start on the lowest-pitched string and move downwards towards the highest-pitched string. Upstrokes reverse the Pattern. Strumming patterns can alternate down and up or repeat the Down and Upstrokes.

The Strum Modifiers were designed with guitars in mind, such as the Sonic Extension, Nylon Sky, and can yield surprisingly realistic results. They can also be an excellent tool for arpeggiating a variety of Patches—even percussion, bass, and synth sounds, such as keyboards and plucks. We recommend that you experiment with them!

Strum Types
When a Step has a Strum Modifier engaged, the notes held down on the keyboard will be strummed in various ways, depending on the Modifier.

There are 10 Modifiers in the Strum menu—6 Downstrokes and 4 Upstrokes.

The Low Note / High Note Emphasis Modifiers strum only the lowest or highest notes being held in the chord, similar to the playing techniques of a guitarist. 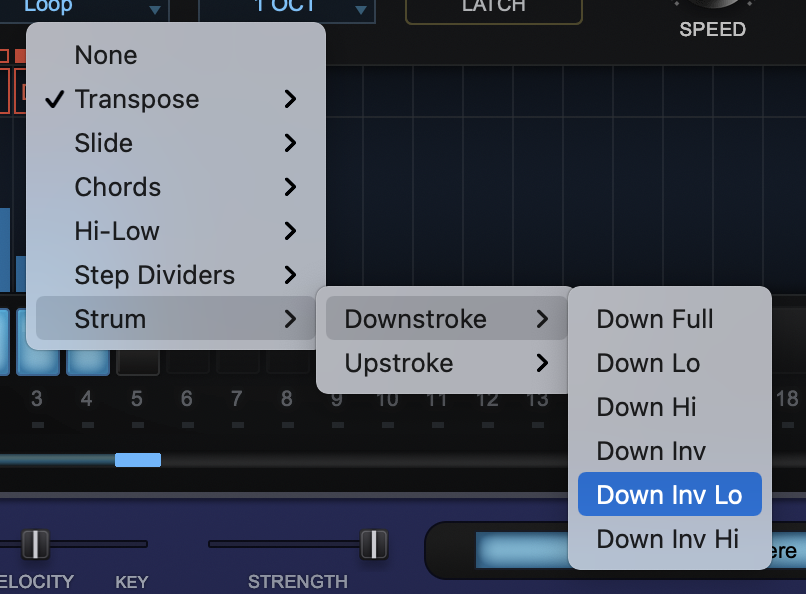 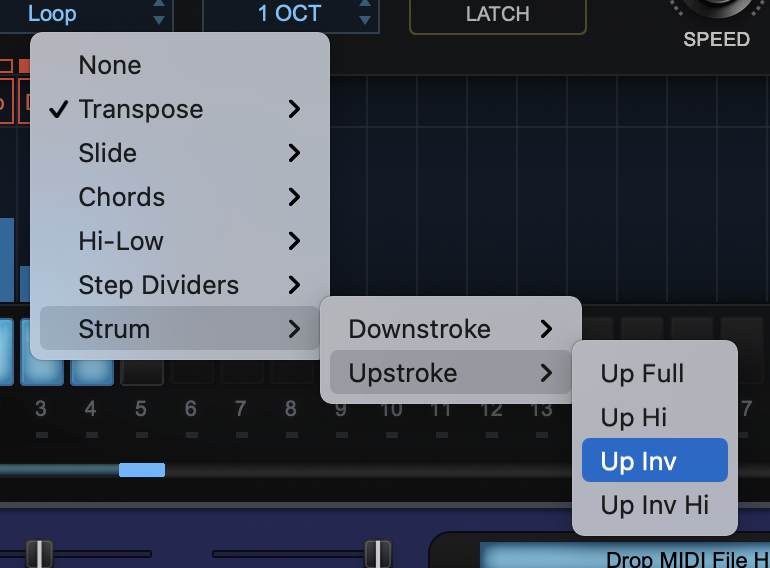 NOTE: You can play chords with as many notes as you wish with the Down/Up Full and Down/Up Inversions and the Arpeggiator will strum them. However, no matter how many notes are held down, the Low Note / High Note Emphasis Modifiers will only focus on the outer ranges. 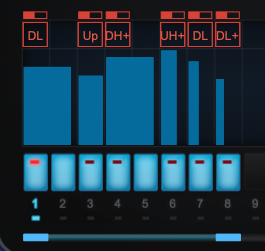 NOTE: Changing the Step length does not alter the timing of the Strum Pattern within the Step—the Strum will happen at the beginning of the Step and in the case of tied Steps, the notes will sustain for the full value of each Step.

Strum Speed Slider
The Slider in the top section of the Strum Modifier controls the speed of the Strum.

*With Patches that have Release Noises, it can sometimes be helpful to go to the SOUNDSOURCE ZOOM and turn them OFF.

NOTE: Note Patterns (such as Chord, Up/Down or Random) are ignored for any Step in which a Strum Modifier is engaged.