The Capture feature allows you to save the results of what happens when Chaos is affecting the Groove.

Pressing the Capture button while RMX is playing creates a MIDI file of the currently playing Groove. Capture will round off to the end of the current pass of the loop. You can see that RMX is capturing when it displays “Capturing pattern, repeats, and dynamics” in the Capture Name Window.

The Capture Tool adds the word “Chaos” to the end of the Groove name in the MIDI file. This new MIDI file can either be dragged-and-dropped onto a MIDI track (if the host supports this feature) or exported as a standard MIDI file for use elsewhere.

You can drag-and-drop the new MIDI file by dragging the file from the Capture Name Window and dropping it onto a MIDI track in your host. 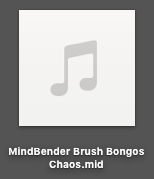 You can export the MIDI file by pressing the EXPORT button. This calls up a “Save File” dialog box which lets you choose the location on your drive.

• A Capture cannot occur while RMX is stopped.

• Slice Menu Mode is the only MIDI Mode that can be captured as a MIDI File. While you are able to use the Chaos Designer when in Groove Menu mode, it isn’t possible to capture the complete performance, as there are too many possible events to store in a MIDI File. So we recommend using audio recording/freezing/bouncing in your host for Groove Menu mode Chaos Capturing:

Check out the Capturing Chaos as Audio tutorial for more info.

• Once the Capture is complete, the Groove stops automatically. The last pass you hear before playback stops is the final pass in the Captured MIDI file.

• If you press Capture after 16 passes have already played, then Stylus RMX will reset the Capture buffer and begin capturing in the same way for the next 16 passes.