“To give birth to a dancing star, one must have Chaos within oneself” —Nietzsche 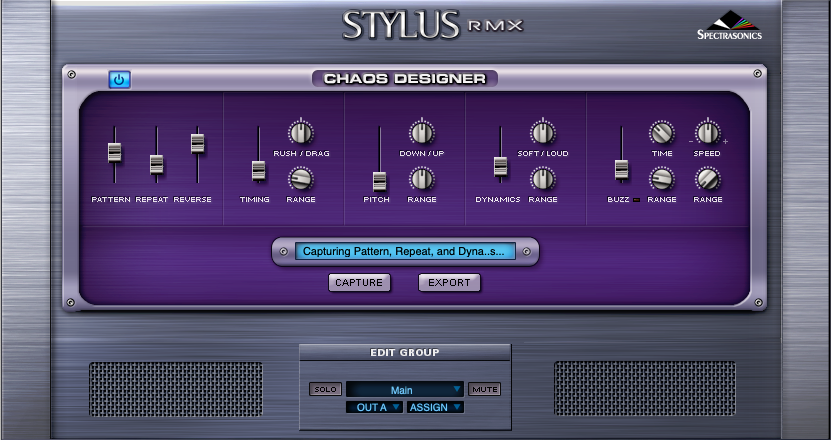 The CHAOS DESIGNER™ technology in Stylus RMX is a unique and powerful feature that addresses a key issue when dealing with loop-based audio—repetition. With Chaos Designer, you can introduce amounts of variation and improvisation to audio loops within RMX. The Chaos Designer rearranges the slices in musically intelligent ways, which can give the impression that the loops are improvising on their own. The results can be quite subtle or radically wild. You can even capture some of these variations into a MIDI file for repeatable results and further editing.

Be sure to check out the Chaos Designer, Chaos Buzz, and Chaos Maximus Trick video tutorials which further demonstrate the capabilities of this amazing feature.

*Chaos Designer produces a wide range of possibilities. However, it is most powerful and musically useful when used in conjunction with the Edit Groups feature of Stylus RMX, allowing you to have independent control of Chaos on groups of slices and beats. The most musical results are when some beats in the rhythm are constant (like the quarter notes for example), and the remaining beats have Chaos applied.

NOTE: Chaos works in both Slice Menu and Groove Menu MIDI Modes. However, there are some differences as noted in the following pages.