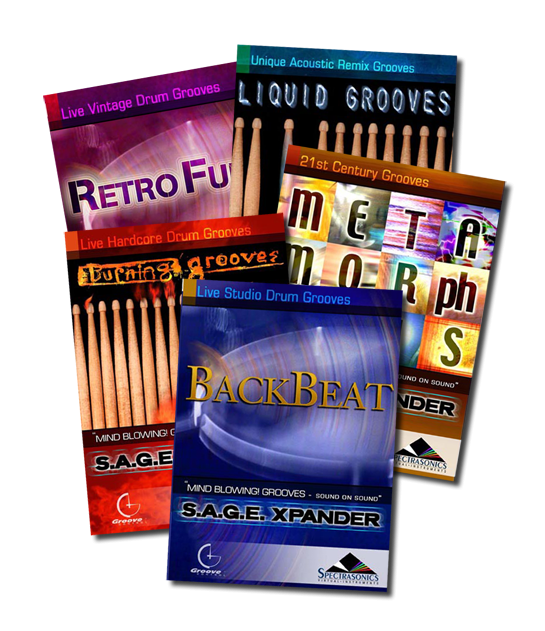 Grooves and sounds are a highly personal matter. Every musician has different tastes and interests in the kinds of source Grooves they need to work with to realize their musical ideas.

One of the best features of RMX Xpanded is that it comes with thousands of incredible acoustic drum and percussion Grooves that let you explore different styles and genres.

There are also four killer additional SAGE Xpanders™ available from ILIO™.
Visit the ILIO website for details about these titles.

Special Multi Patch Libraries
Each of these SAGE Xpanders also has a library of special Multi Patches that take advantage of all the features of Stylus RMX and show the Xpander in cool combinations with the RMX Core Library. These multitrack grooves are extremely flexible and easy-to-use at any tempo.

Bonus Libraries
Each of the Spectrasonics SAGE Xpanders includes a Bonus Spectrasonics.db library that features the Groove Control sections of Bizarre Guitar and Vocal Planet, as well as previously unreleased material and a large variety of Grooves from the Distorted Reality libraries.

Each of the ILIO SAGE Xpanders includes a Bonus ILIO.db library that features new bonus Groove material from John “Skippy” Lehmkuhl and Chris O’Brien, as well as a collection of Groove-Controlled tonal loops from their Phat Fingers, Memphis Horns, World Winds, and Transfusion libraries.