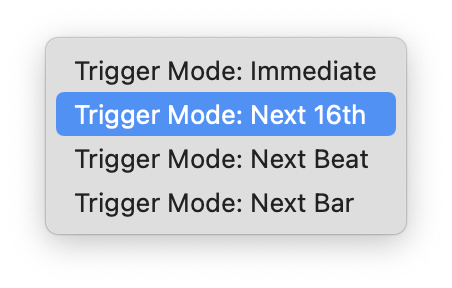 There are four Trigger Modes:

As soon as a note/play command is received, RMX plays the Groove. There is no delay. Immediate Trigger Mode works well when playing notes from sequencer tracks or for instantaneous triggering from a MIDI controller. RMX starts the Grooves exactly as they are placed on the MIDI tracks. Playing Grooves in this mode does not provide any assistance in beat synchronization.

This Trigger Mode waits until the next sixteenth note to play whatever note/play command was sent. In other words, there will be a lag time between when RMX receives a note command and when it actually plays it. This delay is a maximum of a 16th note at the current tempo. This makes it easy to synchronize multiple grooves by playing the note or pressing play just before the desired beat. Next 16th Mode allows odd offsets for interesting syncopated results when performing live.

This Trigger Mode waits until the next beat to play whatever note/play command was sent. The delay is a maximum of one beat. Next Beat mode also makes it simple to synchronize multiple grooves by playing a note or pressing Play before the next beat.