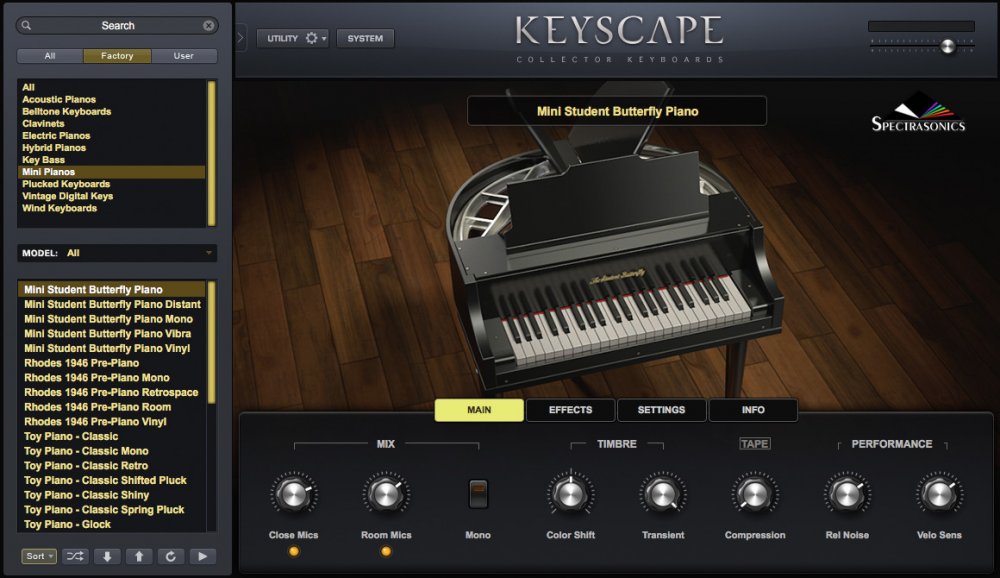 In the 1930s, the Rudolph Wurlitzer Piano and Organ Company created the space-saving “Butterfly” baby grand piano series, designed for smaller homes and apartments. They came in full-size models, as well as the 44-key “Student” Miniature Grand. This rare instrument produces a clear and lovely hi-range tone that could be compared to a Grand Piano in a similar way that the mandolin would compare tonally to a traditional acoustic guitar.

Called “Butterfly” because the lid was divided into two opposing “wings” which could be opened for more volume, the “Student Butterfly” has a cast iron harp, strung with real piano strings (only 2 per note, as opposed to three), and a real piano action and soundboard. They were made for children and marketed as a child’s “first” piano. Ultimately considered more of a novelty, very little literature has been written for its limited range.

Few of these diminutive and distinctive gems are still in existence, and having one with an extended range in Keyscape is especially useful. These instruments are sought after by musicians and collectors alike – not only for their rarity and unusual appearance, but for their uniquely delicate sound. We preserved the special tone of this petite piano with both stereo close and room mics which can be adjusted in the Custom Controls of Keyscape.