Tremolo is a classic effect commonly used in vintage electro-mechanical keyboards, guitar amplifiers, and available in effect pedals. It adds motion to the sound by quickly alternating the volume between loud and soft, or left and right, creating a pulsing effect.

In the Patch, “Celeste – Dry,” Depth controls the amount of variation between loud and soft and Speed controls the rate of the pulse. 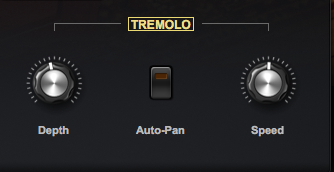 In the Patch, “Electric Grand CP70,” Age emulates what happens to an opto-circuit as it gets older and approaches the “vintage” stage – the separation between ON and OFF is not as crisp.