TONE is a term used to describe the overall quality of a sound and often refers to the balance of low, mid, and high frequencies.

Depending on the instrument model, TONE controls operate in different ways, allowing the sculpting of a sound by adjusting the balance of specific frequencies. Certain models include more detailed controls and in others, simple bass and treble controls are the perfect complement. If a model is most often used with an amp, the tone will be presented as part of the AMPLIFIER controls.

Simple Bass and Treble controls are all that is needed in the Patch, “Vibanet.” 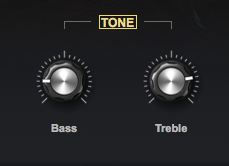 The BOOST switch below Treble in the “Wurlitzer 140B” Patch boosts very high frequencies.

When TONE is activated, the Low Cut knob in the Patch, “Chimeatron – Vibraharp Dreams,” controls the cutoff frequency of a high-pass filter, removing low frequencies and letting high frequencies pass through. When the knob is fully-clockwise, much of the bass response has been filtered out.

In the “Electric Grand CP70“ Patch, the controls give you up to a 20 dB boost at preset low and high frequencies. 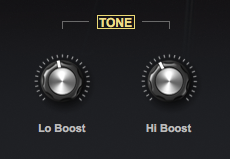