The controls in the PERFORMANCE section add to the instrument’s realism by controlling how each model reacts to your playing. These settings are presented on the right side of every MAIN tab and will change depending on the model or Patch.

In many of the models, we have included detailed samples of release noises – the noises the keys make when you lift your hands. The Rel Noise knob controls the volume of these noises. To have a better idea of their importance, turn the knob all the way down and play something. Then turn it half-way up and play it again. You’ll see just how much of a difference they make! The “T” button under Rel Noise (“T” stands for “transition) increases the transition time from the sustain and release samples, making the key release feel a bit looser.

If you have a sustain pedal connected to your MIDI controller, engaging it will trigger the sound the pedal makes in models that have mechanical sustain pedals. In the Patch, “Wing Tack Piano,” the Pedal Noise knob controls the level of that sound.

In the Patch, “Toy Piano – Saucer Bell,” the Rel Time knob controls how long the samples ring after you release the keys. Use a high setting for playing bell-like parts.

The PERFORMANCE controls in the “Clavichord” Patch contain a Velo Vibrato button, which activates additional velocities that contain vibrato samples. The intensity of the vibrato varies from subtle at medium velocities, to more pronounced at the highest velocitiy.

In the Patch “Clavinet C,“ the Damping knob lets you dial in just the right amount of Clavinet C’s mechanical damping lever, which mutes the strings.

The Harmochord keys produce a mechanical click when you play them. The Click button turns this mechanical noise ON / OFF. Attack controls the time of the attack phase of the model’s envelope. 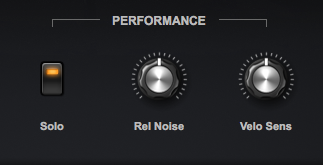 The Patch, “Electric Harpsichord,” has a Mute button which engages the sound of the instrument’s mechanical mute. 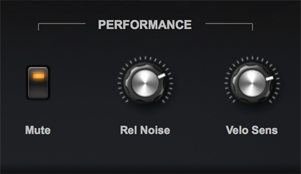