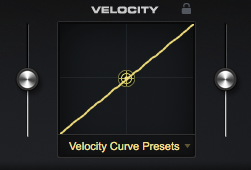 Based on a simple X-Y pattern, the Velocity Curve converts the incoming MIDI velocities into the MIDI velocities sent to the plug-in, effectively changing X to Y in a manner you can scale and control.

The horizontal axis and represents the MIDI velocity that Keyscape receives from your controller. Moving the horizontal slider (SLOPE) to the right will scale lower incoming velocities and convert them to higher velocities as if you were playing harder.

The vertical axis represents the MIDI velocity value used to trigger Keyscape. Moving the vertical slider (OFFSET) will control the offset and range of the converted velocity.

The CONTROL POINT allows you to modify the shape of the velocity curve from linear to convex or concave for even greater sensitivity. It can be dragged anywhere in the grid and sets the curve’s exponential value. In other words, you can set how quickly and at what point in the velocity range there is an increase or decrease in intensity.

Once you understand the Keyscape VELOCITY Curve settings, you’ll find them easy to use. You can customize and adapt existing ones, as well as create and save your own. Here is the list of presets.

When adjusting velocity curve settings is important to keep in mind that all controllers are not created equal! The best ones have a high (fine) resolution in MIDI Velocity output and can respond in subtle ways, allowing for a wide range of velocities, an even response, and more nuanced playing.

Some controllers have a lower resolution and skip certain velocities, including leaving out the lowest and highest velocities and won’t play soft enough or loud enough to access the full velocity range of the sound.

Velocity curves can also be a matter of personal taste, based on your playing style. You might even find you like different curves for different genres of music. There is no right or wrong and it’s wide open for experimentation!

NOTE: This applies to all controller types, not just keyboard controllers.

We’ve carefully created custom Velocity Curve presets for the most popular MIDI keyboard controllers, but if you have a controller that isn’t yet on the list, or you’re just interested in customizing yours for a certain genre or playing style, please see the following examples.

The two axes represent MIDI velocities 1~127. The farthest right / highest is 127, the mid-point lines are 64, and the farthest left / lowest is 1.

In this example, the velocity range is compressed. The lowest / quietest MIDI velocity inputs (from approximately 1~29) are raised to around 30 and above, and the range extends up to 127( loudest). 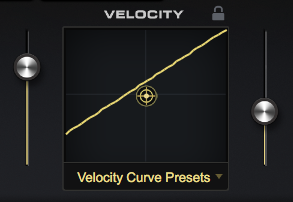 Here, the MIDI output is compressed downward—any incoming velocities above 90 are constrained to 90. 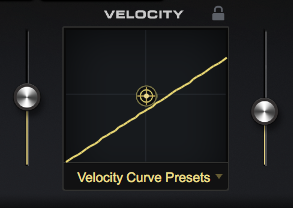 In the example below, any input velocities below around 30 are scaled down to 1 and incoming velocities above 30 are gradually increased and converted to a maximum of around 100. 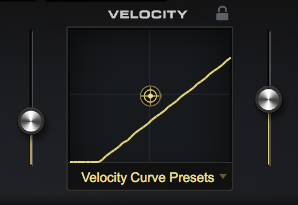 In this example, the quietest input velocities are scaled up to start at around 40 and anything over around 75 will be converted to 127. 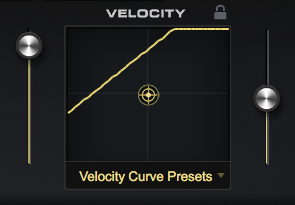 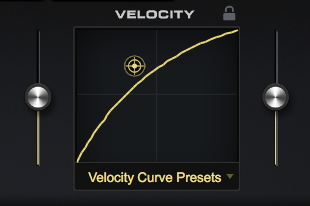 Conversely, if you find that when you play, the medium velocities are too pronounced, drag the Control Point down and to the right until it feels more even. 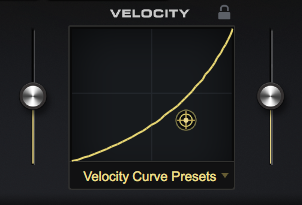 Used together, the Control Point, the OFFSET, and the SLOPE sliders can create a wide variety of curves.

*Of course, your ear should always be the final judge!