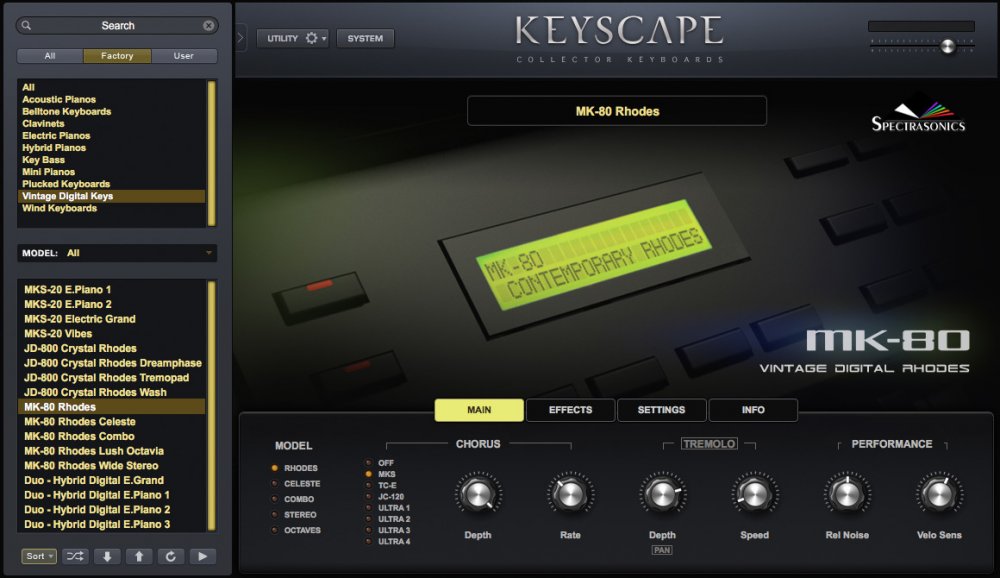 In 1987, shortly after they discontinued the Rhodes® product line, Fender sold the Rhodes® brand name to a well-known Japanese manufacturer where Spectrasonics President Eric Persing was Chief Sound Designer. Two years later, the Japanese company released the MK-80 – a digital “re-imagining” of the electro-mechanical Rhodes®. The MK-80 featured a solid, 88-key weighted-action that could also be used as a MIDI controller and came with a practical flat top for stacking other synths. It felt great to play and came with 4 separate electric piano sounds, along with a trio of high-end analog stereo effects: a built-in tremolo, phaser, and chorus.

Because of the reverence for which die-hard Rhodes® fans have always had for the original electro-mechanical instruments, it might have been a mistake to brand the MK-80 keyboard as an official, modern “Rhodes®” keyboard. On internet Electric Piano forums, the MK-80 has a poor reputation. This is especially interesting, because internally this digital instrument was that company’s follow-up to the greatly revered MKS-20 and uses a more advanced version of the Structured Adaptive® synthesis technology. While it sounds nothing like a classic Rhodes®, it is a wonderful, brighter variation of the much-loved MKS-20 sound – excellent for layering with other sounds! We are happy to revive this great ’80s-style “Vintage Digital” sound in Keyscape!