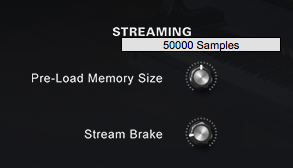 The first column contains controls for the streaming function in Keyscape. Streaming permits samples to reside largely on disk, rather than being loaded into RAM. In this way you can use large samples with a relatively small amount of memory.

This control determines how much memory is devoted to sample pre-load. The higher the settings, the less likely that glitches will occur due to streaming problems. However, turning it up requires more memory and will increase the load time for Soundsources.
Recommended values are between 22,000 to 66,000, with 60,000 as the standard default value. If Patches use Timbre or Sample-Start, this parameter might need to be raised over 40,000.

NOTE: Soundsources must be reloaded when changing this parameter before the new value will take effect.

The control balances system resources between streaming and other operations. This is the second most important streaming parameter, after the Pre-Load Memory Size. It should generally be set to a moderate value around 0.1. Values above 0.5 may lead to streaming glitches due to the deferring of streaming reads in order to give priority to other processing operations in the application. Turning it down to zero may cause glitches in other operations due to the streaming monopolizing the CPU. There is a relationship between this parameter and the Num Bytes Per Read parameter. When that parameter is turned up, this parameter should generally also be turned up.
Range – 0.00 seconds to 1.00 seconds

This display shows diagnostic numbers that are used for Customer Support purposes.