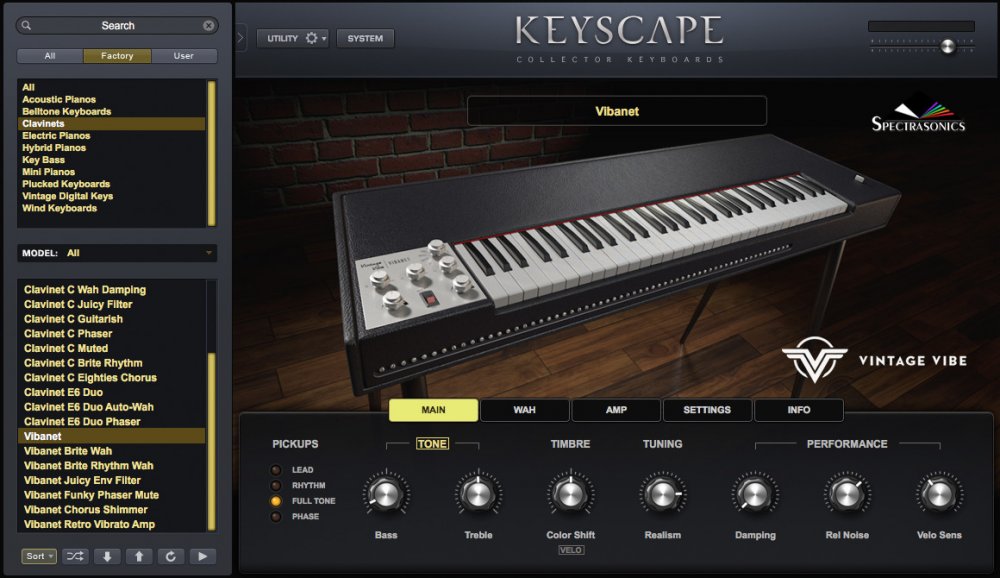 We are pleased to present the official virtual instrument version of the Vintage Vibe Vibanet®. When Stevie Wonder plays “Superstition” today, it’s probably not on a Clavinet® – it’s most likely on one of these! Vintage Vibe started making their own electro-mechanical instruments in 2011 and released the Vibanet® in 2014. This high-quality, modern take on a classic sounds like the original, but with a lot more “zing!”

Like the Clavinet®, the Vibanet® is an electro-mechanical keyboard, with two shock-resistant, single-coil pickups which are positioned above and below the strings. Its keys cause polymer-tipped hammers to strike the electric guitar-like strings, pushing them abruptly into contact with a metal “anvil” which serves as a fret, causing them to sound. Releasing the keys takes the strings off the fret and the sound is damped by their proprietary Clavi-gel® (instead of yarn), which covers the end of each string.

Its rugged build weighs half of what the original Clavinet® weighed. The custom-wound strings are easy to tune with the screws right on the front, below the keyboard, and are easily replaced. The internal pre-amp, which is also available as a replacement for original Clavinets®, is extremely quiet. There is an awesome built-in auto-wah filter with adjustable touch sensitivity and a mechanical mute switch on the right side of the keyboard. In Keyscape, all of these performance details have been faithfully modeled in our software version of this modern classic!