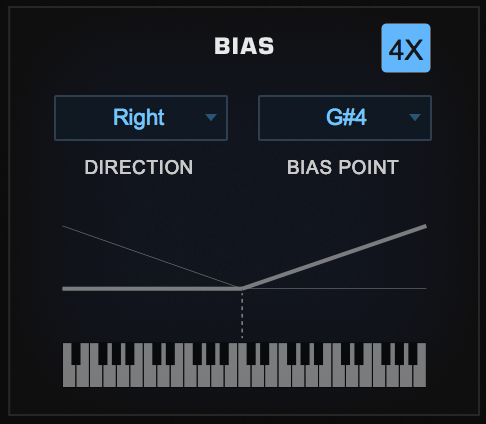 Bias is a useful Modulation Source which can be applied to any of Omnisphere’s modulatable targets. Bias has a user-defined “Bias Point” (any key on the keyboard), which can be thought of as a fulcrum from which a linear boost or decrease can be applied above or below. As you play higher and/or lower than the Bias Point, the effect becomes more (or less) pronounced.

Bias is related to Keyboard Tracking, but whereas Key Tracking uses a fixed, invertible linear control over certain parameters across the entire keyboard (such as opening or closing Filter Cutoff), Bias gives you much more flexibility.

Each part in Omnisphere has eight Bias sources.

When using Flex Mod, Bias parameters are displayed in Modulation Zoom on the left.

NOTE: You can display these parameters at any time by right-clicking on a target that is modulated by Bias and selecting it from within the “Show Modulation” menu.

Sets the direction in which the modulation is applied. It can be set above or below (Left or Right) from the Bias Point.

*If you want to to use Bias in both directions (both above and below the Bias Point) at once, you can apply two Bias sources and select a different direction in each. You may also assign more than one Bias modulation to the same area of the keyboard.

Select the Bias Point from the pull-down menu. This note becomes the “zero point” from which the modulation rises or falls.

Click on the 4X button to multiply the effect of the modulation by 4. This can be used in conjunction with the SOURCE and TARGET amount sliders to fine-tune the effect.

You can use the INVERT button in the mod slot to reduce the Bias effect (e.g. instead of increasing amplitude, you can decrease it) as you play further away from the Bias Point.

Controls the amount of the Bias source applied to the target.

There are many creative ways to use Bias. Here are some examples:

• Perhaps you have dragged one of your custom Soundsources into Omnisphere and although you find that it sounds great at Middle C, you can hear aliasing (or it is too piercing) in the range above C6. To compensate for this, you can use Bias to modulate Amplitude. Set the Bias Point to C6, then set the Direction to “Right” and INVERT the range, The higher you play above C6, the lower the level will be. You can use the 4X RANGE for a steep falloff.

• You can use Bias to modulate an Aux Send and set the Bias Point to a high note on your keyboard so that the effect is only heard when you play above the Bias Point. Additionally, you might want the FX to become more or less pronounced as you play higher or lower. This technique can be used in conjunction with the Arpeggiator to add interest to the pattern.

• You can also use Bias to crossfade between Layers, creating up to a four-way keyboard split within a Part, similar to what you can do with multiple Parts in STACK Mode.

*Give it a try! You will certainly be able to find many creative ways to customize your Patches and your performance setup.