HARD SYNC is a feature on some analog synthesizers which gave the timbre a “throaty” diphthong type of sonic characteristic when swept. Hard Sync was popularized on synthesizers like the Prophet 5 and the early Oberheim synthesizers for a more metallic and aggressive timbre, and is especially useful for lead sounds. Hard Sync is achieved by using two oscillators, one which is the “master” and the other the “slave.” The slave is forced to restart its waveform when hard-synced with the master oscillator and the master controls the pitch. Any changes in the slave oscillator’s pitch will not change the pitch of the master—instead the overtones and harmonic structure are changed. 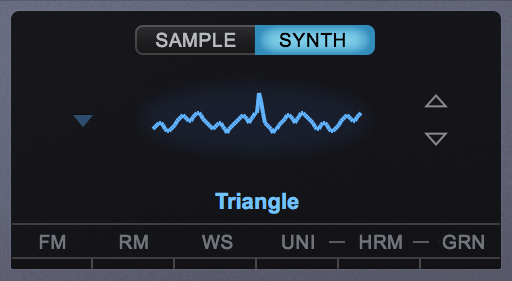 In the past, an oscillator would need to be sacrificed to get this effect, but Omnisphere has a hidden, dedicated oscillator just for Hard Sync. The Hard Sync oscillator becomes the slave and the Oscillator’s waveform is the master. The waveform display will dynamically change as the HARD SYNC slider is moved. HARD SYNC is modulatable.

NOTE: For the NOISE waveform only, HARD SYNC control acts as a stereo width control that is mono at the minimum setting and gradually spreads the noise into both right and left channels towards the maximum setting.