The ADSR Envelope slider interface operates the same way for all the different envelope types in Omnisphere.

The screenshot above is from the Envelopes Zoom page, but illustrates what a standard ADSR Envelope looks like. The first to second point (or Stage) is the Attack time; the second to third point is the decay time, the third to fourth point reflects the Sustain level. After the note is released, the Sustain level drops away at a rate based on the Release time.

When viewed on the MAIN page, the ADSR looks like this: 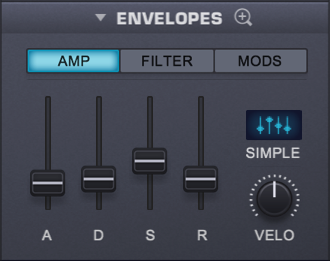 The ‘A’ stands for ATTACK, which controls the attack time of the envelope. At minimum setting, the Attack is immediate, so the Envelope will start as soon as a controller triggers it. Higher settings will delay the ATTACK time, so the sound will gradually fade in.

Range between 0 to 20 seconds.

Range between 0 to 20 seconds

Since each Envelope is capable of having either simple or complex contours, Omnisphere displays the status of the envelope shape with two icons:

The Simple icon looks like the four ADSR sliders, and will be displayed as long as the envelope has only 4 stages.

When an envelope has more than 4 stages, its icon will change to display the Complex icon, which looks like a Complex envelope, and includes an “X” button.

When the X BUTTON is clicked, it will change the complex envelope contours to a SIMPLE one (after asking you to confirm), and the icon will revert to the SIMPLE icon. This can’t be undone, so use it with caution!

NOTE: Changing an Envelope’s shape to complex can be done by loading a Complex Envelope Preset or by accessing the Envelope Zoom page and adding stages.

VELO is short for Velocity Sensitivity and is available for the AMP and FILTER envelopes. The Velocity knob controls how much MIDI velocity will affect the output signal of the Envelope. Moving the knob clockwise increases the dynamic sensitivity of the envelope, and moving it counter-clockwise decreases the sensitivity. This control is duplicated as a fader AMP and FILTER tabs in the FILTER ZOOM.

NOTE: Each of the VELO controls for the four AMP and four FILTER envelopes are independent. The VELO control will affect only the selected envelope.

The DEPTH controls are dedicated to the four MOD Envelopes. Turning this knob clockwise increases the envelope’s dynamic output that is sent to the modulation matrix. The default setting is at maximum.