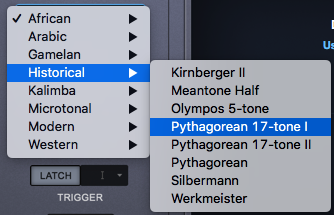 One of Omnisphere’s versatile features is its ability to utilize different tunings including historical temperaments, microtonal and kalimba scales, as well as user-created temperaments. Omnisphere can import any .TUN scale file.

Each Part can have a single Scale active at one time. Up to eight different Scales can be simultaneously loaded in a Multi (one per Part).

NOTE: Scales can be applied at the Global, Multi, or Patch level.

NOTE: Selecting “Multi” mode from the System Page / Master Tune menu allows you to save a unique Master Pitch in each Multi.

Each tuning lists the number of notes per octave. For example, if you select “Pelog 7-tone,” the octave will repeat every eighth half-step.

NOTE: The Menu button is highlighted in blue when the Scale is changed from Equal Temperament (default).

These ten scales are from African mallet idiophones and lamellaphones (commonly called kalimbas or moires), which feature metal tines that are plucked with the finger. The suffix AD indicates the notes are mapped in an Ascending/Descending arrangement where the scale is duplicated and mapped in opposite directions—starting from various pitches on the keyboard.

The first two Arabic scales were created in the first century by Persian philosopher Abu Nasr al-Farabi and are still used in modern Arabian music. Sabbagh tuning is designed for the Oud (a lute-like instrument) and the fourth one is a common Turkish 24-note scale.

These scales are used in Indonesian Gamelan music. A Gamelan is an ensemble comprised of metallic percussion, simple strings and horns, and vocals. These scales work well with metallic, bell-like sounds.

These are mostly octave-based scales, where attempts were made to resolve the inherent “un-pure” nature of the 12-tone scale. As a result, some intervals and chords sound quite pure and others are more dissonant. The dissonant notes are sometimes called “Wolf intervals.”

Most of these scales were taken directly from the some of the Soundsources from Omnisphere’s Core Library. By loading one of the following tunings to the corresponding Soundsource, you’ll be able to play it with its original tuning. Some of the Kalimba tunings use Ascending/Descending mapping.

These scales add additional microtonal steps from just under an octave to as many as 48 tones PER OCTAVE.

These alternative scales were created within the last 150 years.

Since the tines on mbiras and kalimbas are not typically arranged from low to high but rather are mixed in various ways, the best way to simulate the playing of these instruments on a standard keyboard is to arrange the tuning in both directions from tow or three pitches across the keyboard. These tunings are designed to be played only on the white keys. Some of the African Kalimba scales use this Ascending/Descending arrangement.

As you can see in the Rhumba Box example below, that instrument has seven tines, the lowest tine in the center. The Ascending/Descending tunings are mapped from low to high on the white keys (black keys are unmapped) and the middle note of the ascending scale is mapped to F65. The note order is then reversed in each direction. 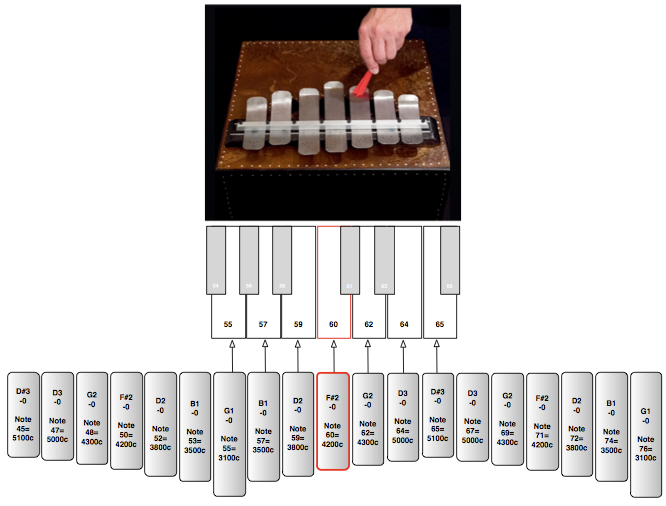 NOTE: In Ascending/Descending tunings the notes do not necessarily correspond to the key number to which they are mapped; they are simply grouped as they were tuned on the original instrument.