When Latch Mode is enabled for a Part, repeatedly playing a note will toggle the note ON / OFF. When it is toggled ON, the note will continue to sustain, even if the note is released. Playing the same note again will toggle it OFF.

When the STACK MODE page is open, you can access the Latch Mode setting for a Part by Right/Control-clicking on the Part Region. Select “Latch Mode” from the context menu to toggle it ON or OFF for the Part.

NOTE: A Part’s Latch Mode status can also be viewed and changed from the MAIN Page using the controls on the left or from the LIVE MODE page using the LATCH View button. The LATCH Icons are MIDI-learnable, so you can assign a hardware control to remotely enable or disable LATCH for a Part.

Latch Mode allows rapid and creative layering of multiple notes or Parts. Using splits, you can also play along using other unlatched Parts in STACK MODE. Latch Mode is especially useful when working with rhythmic sounds, and when used together with Trigger Modes, allows one-shot triggering of sounds quantized in real-time.

Latch Mode is set independently for each of the eight Parts. It is also independent from STACK MODE, so STACK MODE does not need to be enabled for Latch Mode to be active. 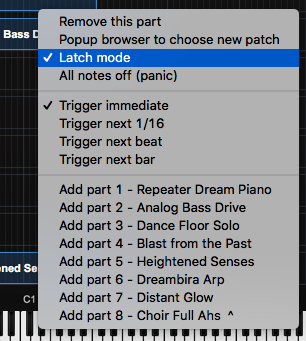 To enable Latch Mode for a Part, Control/Right-click its Part Region, and select the “Latch Mode” option from the context menu.
When Latch Mode is enabled for a Part, a checkmark will appear next to the Latch Mode menu option, and the word “Latch” will be appended to the Part Name on the Stack Mode grid.

To disable Latch Mode for a Part, select “Latch Mode” again from that Part’s context menu.
When Latch Mode is disabled for a Part, the Latch Mode menu option will be unchecked, and the word “Latch” will no longer be appended to the Part Name.

NOTE: Disabling Latch Mode for a Part while it’s playing will immediately send an “All Notes Off” message to the Part. The tails from FX and release stages from envelopes will continue to decay. The All Notes Off command will apply to all notes that are playing on that Part.

All Notes Off (Panic) / STOP ALL 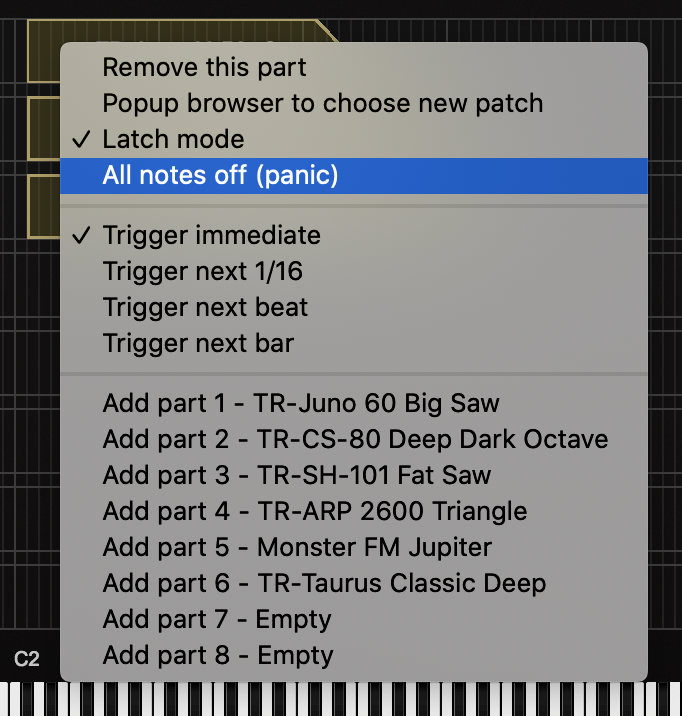 Sometimes when using Latch Mode, it’s possible to lose track of which notes are latched, or you might have multiple Parts playing in Latch Mode that you want to stop simultaneously.

The All Notes Off command will send an “All Notes Off” message to all 8 Parts at once. All Parts will stop playing, regardless of their Latch status. FX tails and release stages from envelopes will continue to decay, so that the cutoff is not unnaturally abrupt.

NOTE: If you have multiple Parts playing using Latch Mode and only want to stop one Part, disable Latch Mode only for that Part.

To access the All Notes Off command, control/right-click on a Part Region, and select “All Notes Off (Panic)” from the context menu.

*You can also stop notes by using the STOP ALL button on the LIVE MODE page. The *STOP ALL*button is MIDI-learnable, which allows you to trigger it using a hardware controller. This is especially useful when using Latch Mode together with STACK MODE.