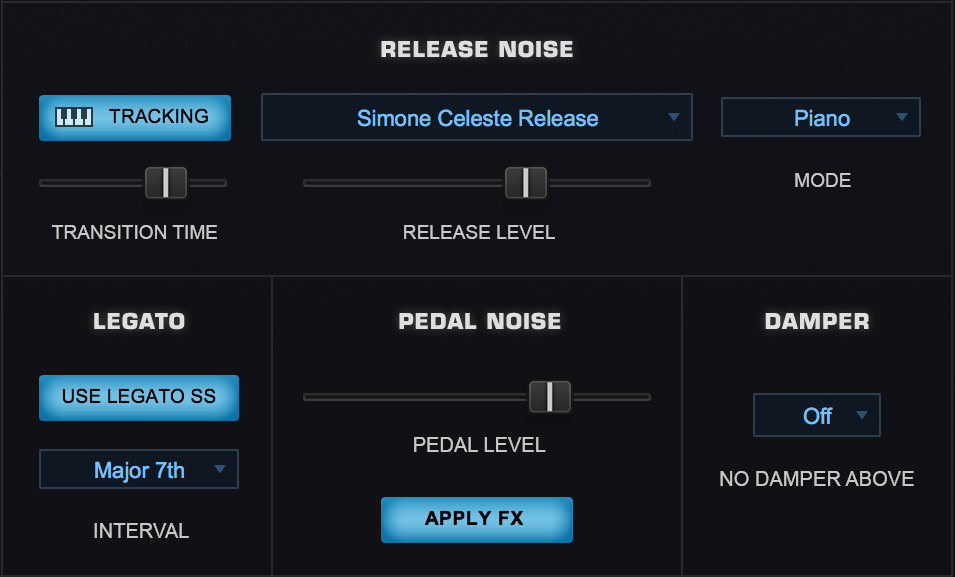 This fader affects the transition time between Sustain Soundsource and the Release Noise Soundsource. It controls how long the note-on samples decay after the note is released, so that the transition between the sustained samples and the release noise samples is musical.

At higher settings you will hear an overlap of the sustained sample release time, and the trigger of the release noise. If the fader is all the way to the left, there will be no overlap.

Release Soundsources are triggered only after a note has been released.

NOTE: The Amp Envelope Release Time must be set long enough to hear the decay of the Release Noise.

When no Release Soundsource is selected and you let go of the key, the Amp Envelope Release time has the same musical result that you would expect on any synth. For example, all the synth bass Patches in Omnisphere and Trilian are programmed with no Release Soundsource, so they behave in this way.

If a Release Soundsource is selected, you will hear it replace the Sustain when the key is released, cross-fading at a rate that is dependent on the Transition Time setting. All the Electric and Acoustic Basses in Trilian and keyboards in Keyscape have their Release Times set quite high so that the full decay of the noise samples can be heard.

There are several Release Noise Level modes from which to choose. They consist of settings that are set up for basses and various keyboard instrument types.

The MODE menu controls how much velocity and volume attenuation is applied to the Release Soundsource—depending on how long a note is sustained. Setting “Trilogy” has no velocity or volume attenuation (this is how release noises were handled in Trilogy). In the following Keyscape-related settings, the volume drops gradually the longer a note is held. Settings “E. Piano 1” thru “Belltone” provide various combinations of volume and velocity attenuation at different time intervals which are appropriate for different instrument types.

When Legato Soundsources are available and loaded, enabling the Use Legato SS button will automatically trigger these Special Articulation samples when playing legato-phrased notes within the specified Legato Interval, providing added realism and nuance to the instrument sound.

NOTE: Omnisphere sounds don’t currently include Legato Soundsources, so this control will have no effect on Omnisphere Soundsources. It is most useful when loading Trilian sounds into Omnisphere.

From this menu you can select the interval within which the Legato Soundsources will be triggered.
Range: 1~ 24 semitones

In Trilian Soundsources where Legato Soundsources are available, the Use Legato SS feature enables very realistic hammer-on, pull-off and other types of performance phrasing. It allows for a very natural playing style, and great sounding Legato trills!

Enabling Use Legato SS will change the way the instrument responds to notes that are played Legato. Successive Legato notes that are played within the specified Legato Interval will behave much like a lead synth using SOLO mode. That is, the next note played will cut off the previously played note. If you sustain the cut-off note, it will sound again when you release the successive note. The key difference is that Legato Mode is polyphonic.

Notes which are played legato, but are outside the specified Legato Interval, will not trigger the Use Legato SS behavior.

NOTE: “Use Legato SS” is a Patch Common parameter. Changing its setting will affect all Layers in the Patch. 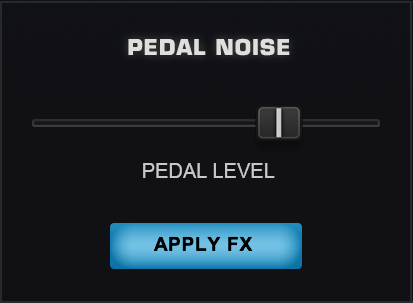 When Keyscape Soundsources that contain Pedal Noises are loaded, you can set the volume of the Pedal Noise with this slider. Selecting the APPLY FX button routes the Pedal Noise through the effects, along with the Sustains and Release Noises.

In the highest registers of certain Keyscape instruments, such as acoustic pianos, electric pianos, and celestes, there is less sustain, therefore no need for dampers. Here, you can set the highest note that uses the dampers. Notes above the selected pitch ring out, just like the real instrument.

NOTE: The Damper menu works only on specific Soundsources, like those from Keyscape. Changing its setting will affect all Layers in the Patch.