RING is short for Ring Modulation, which is similar in concept to FM (and the parameters are exactly the same as those in the FM sub-page). In Ring Modulation the frequencies of both oscillators are multiplied, which changes their overall amplitude.

Traditionally, Ring Modulation is used as an effect to create high-frequency, clangorous overtones. However, Omnisphere’s Ring Modulator is polyphonic and can track the keyboard – meaning the pitch does not have to be fixed: it can follow the pitch of the keyboard. The result is something much more musical and useful than a traditional Ring Modulator.

Each Layer in Omnisphere has a dedicated Ring Modulation Oscillator. This dedicated oscillator can utilize different waveforms and its Frequency, Depth, Shape, Symmetry, and Ring Sync can be modulated. 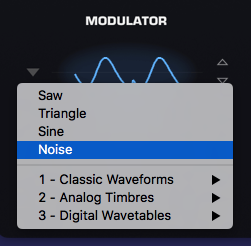 You can select any of the over 500 waveforms or wavetables to act as the modulator. You can select them from the menu by clicking on the waveform display or by using the stepper arrows to the right of the image.

Turns the modulator oscillator ON or OFF.

The small music-keyboard switch enables or disables Keyboard Tracking. The TRACKING button determines whether the modulator oscillator tracks the keyboard. Most Ring Modulators do not track the keyboard, which is part of the character of their sound, but Omnisphere provides the option to enable Keyboard Tracking if required.

Controls the frequency of the modulation oscillator. When the FREQUENCY slider is set to minimum value, very slow modulation is heard. Sweeping thru the different values will cause different overtones become more pronounced, because the modulator is in the audio range.

The notches along the FREQUENCY slider are markers for the frequency ratios that will produce the most useful results.

The values at the notches are decimal versions of the following ratios:

This horizontal slider controls the depth of the Ring Modulation, meaning how much interaction occurs between the carrier and the modulator.

Moving this slider sweeps through the wavetable selected as the Modulator, and depending on the wavetable, can create subtle or dramatic changes. The waveform display will dynamically change as the RING SHAPE slider is moved.

RING SYMMETRY varies the span of the wavetable selected as the Modulator and is most commonly used for Pulse-Width Modulation (PWM). This is especially useful when RING SYMMETRY is used as a modulation destination, as it adds shifting tone color and movement to the sound. The waveform display will dynamically change as the RING SYMMETRY slider is moved.

Hard Sync was a feature on some analog synthesizers which gave the timbre a “throaty” diphthong type of sonic characteristic when swept. Hard Sync was popularized on synthesizers like the Prophet 5 and the early Oberheim synthesizers for a more metallic and aggressive timbre, and is especially useful for lead sounds.

NOTE: All the sliders on this page are modulatable.