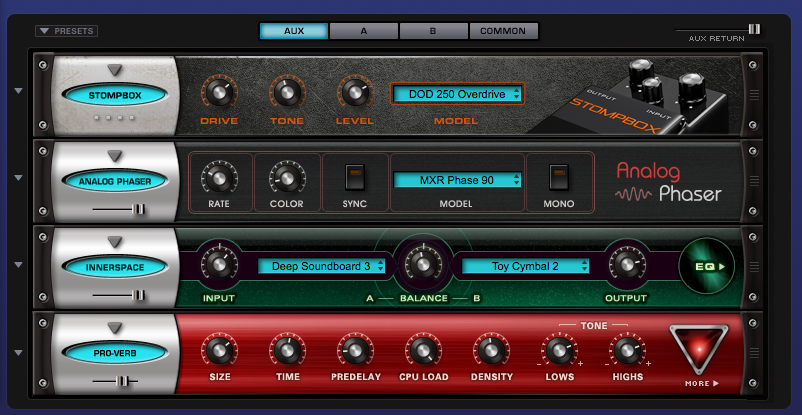 Effects are an important part of Omnisphere’s sound palette, and are used to enhance the sonic character of Patches and Multis. They can add space, density, movement, alter the timbre, and shape the sound in many interesting ways.

The high-quality, built-in FX in Omnisphere are integrated with the interface as well as with the sounds. Any FX units you use are saved along with Patches and Multis.

In one instance of Omnisphere there are 58 different FX Units which can be mixed and matched in 53 FX Racks, a comprehensive FX Preset library, and a powerful feature set for integrating the FX with the synthesis engine.

Each of the 8 Parts in Omnisphere has six insert racks (one for each of the four Layers, an AUX rack and a COMMON rack for the entire Patch). Additionally, at the Multi level there are 5 racks that are shared by all Parts (four AUX racks and a MASTER rack).

Omnisphere uses Inserts for Patch FX, and Aux Sends for adding FX to the Parts in a Multi. Insert FX affect only the Patch into which they’re inserted, either pre or post-fader, while multiple Parts can share any of the Aux Sends FX. All Parts can also go through the final Master Rack.

There’s no limit to how FX can be applied creatively, but certain FX, such as Compressors and Modulation FX, are best used as Inserts. Other FX, like Reverbs and Delays, are best used as Send FX. Deciding when and where to apply FX is also an important part of optimizing CPU usage in Omnisphere. Using one reverb in an AUX Send for all Layers is far less CPU-intensive than using one reverb for every Layer.

The position of an FX unit in the audio chain will affect how it sounds and reacts. FX units can be easily repositioned in any of the FX racks by clicking on the rack ear’s handles and dragging the unit to the desired position. To move an FX unit to another rack, you can copy and paste the effect preset from the pull-down Presets menu to the left of the unit.

One of the key features of Omnisphere’s FX is that almost all the FX parameters can be modulated with any Modulation Source. This means that FX can be fully integrated into the synthesis architecture and character of a Patch, making them much more than simple FX plug-ins.

All FX parameters can be MIDI-Learned for hands-on control and enabled for Host Automation.

In addition to individual FX Presets, you can also load or save Rack Presets, which include entire FX chains with all of their settings pre-loaded.

All Part FX can be globally bypassed by clicking on the blue LED under the FX tab. The LED is blue when FX units are in use and turns red when in Bypass mode. The FX page will become greyed-out when in Bypass Mode.