The FX in Omnisphere are organized into Racks, with each one containing up to four FX Units.

A Patch in Omnisphere can contain up to six Racks of four FX Units each, for a total of twenty-four FX Units in a single Patch.

To access the FX Racks for a Patch, select a Part in the header and then select the FX button.

Each Layer of a Patch has a dedicated FX Rack. The FX in these Racks affect only the specific Layer into which they’re inserted. These are Pre-fader Insert FX.

The A/B/C/D racks feed into a COMMON rack, which affects all four Layers.

The COMMON and A/B/C/D racks can use their “AUX SEND” control in the top right to send audio to the AUX rack. Racks A/B/C/D can send audio PRE or POST Layer Level via the “PRE–POST” switch. The level of the AUX Rack output can be controlled from the “AUX RETURN” slider in the top right.

A MULTI in Omnisphere can contain up to four AUX Racks plus a MASTER Rack, for a total of twenty FX Units (in addition to the FX racks in each Part).

To access the FX Racks for the four Aux Sends and the MASTER Rack, select the MULTI tab in the header and then select the FX button.

Each of the four Aux Sends has its own FX Rack. The four Aux FX Racks can be used by any of the eight Parts in a MULTI using the Aux Sends on the Mixer page.

The final FX Rack in the signal chain is the Master Rack. All audio routed through OUT A runs through the Master FX Rack.

In summary, a MULTI can have up to 20 FX Units loaded in the MULTI FX racks, plus 8 Parts containing up to 24 FX Units each. This means a fully-loaded MULTI can have as many as 212 active FX Units in 53 Racks loaded at once. Of course, actually running that many simultaneous FX would require a very powerful computer!

Below is the FX Signal Path to give you an idea how Omnisphere’s FX are chained. 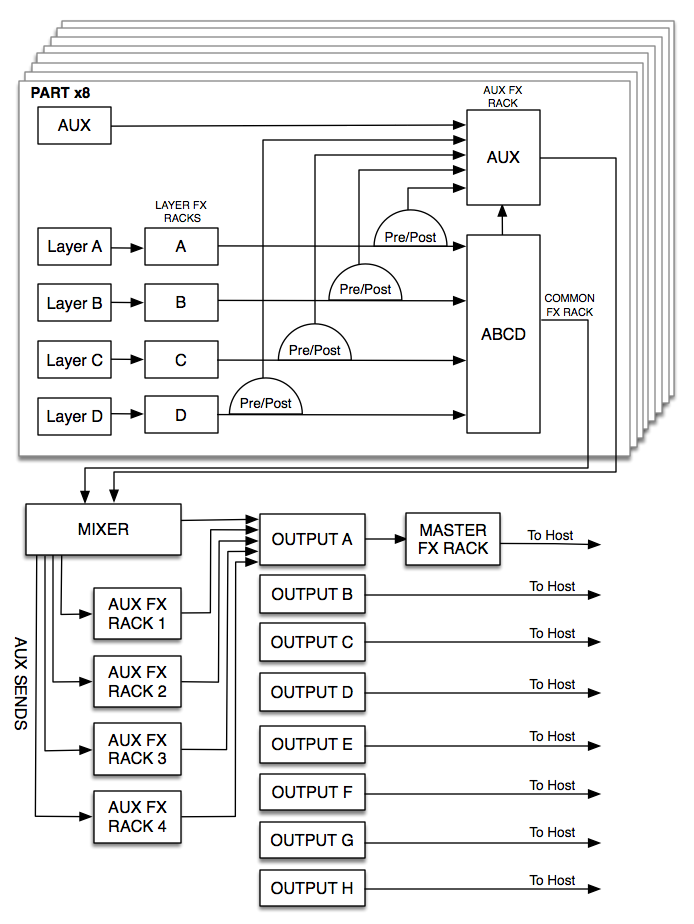 Each FX Rack has four FX Slots. The signal flow of every FX Rack type is in series—feeding the audio from the top slot down.

An example of this is illustrated below:

NOTE: The Master FX rack uses OUT A only.